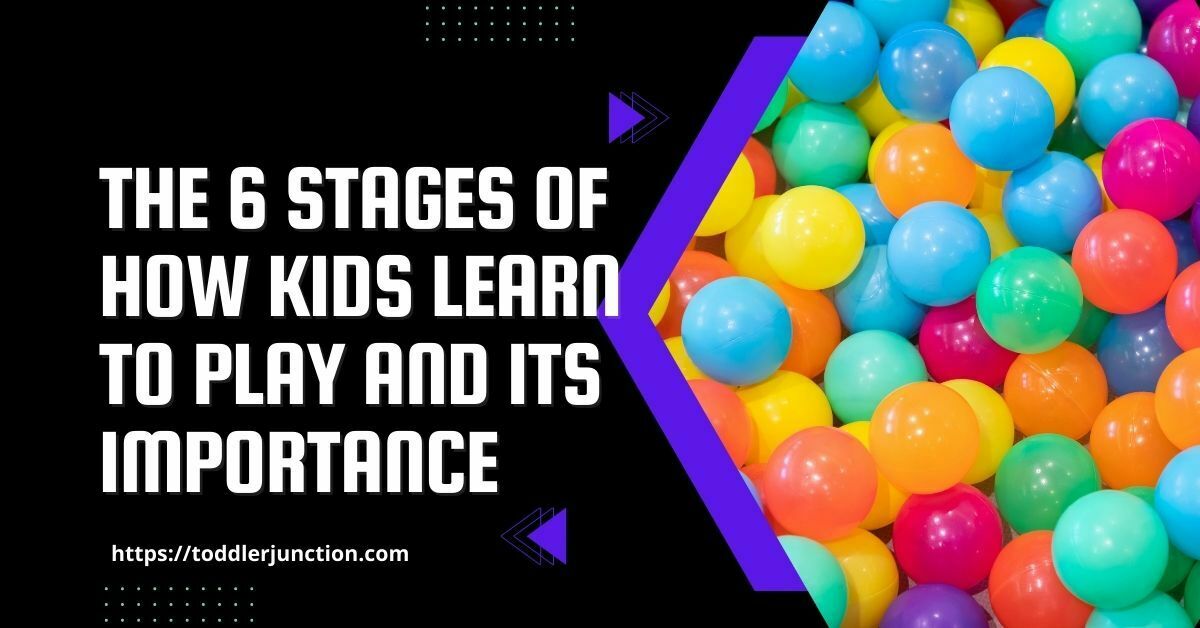 Fun is the primary goal of play. Play is any activity your child finds entertaining and fun, whether organized or unstructured. But for your child, play is far more than a good time! Different play development phases occur as a child grows.

Play is generally seen as a beneficial tool to measure a child’s social connection and involvement progress.

Children’s play styles change as they mature and develop. This article will take a quick look at how children’s social play evolves and changes over time. The social play cycle has six stages and begins at birth.

Importance of Play for kids

Albert Einstein once said that “play is the highest kind of research.” We used to believe that play was mindless fun. However, evidence indicates that kids learn when playing.

Through play, children can develop critical social skills while playing and learning about science, math, and engineering. Children can learn how to solve problems, speak up for themselves, make decisions, cooperate in groups, share, and resolve conflicts.

The 6 Stages of Play in Early Childhood

After carefully studying toddlers during Play, Mildred Parten created the stages of social play for kids. Children go through several play phases during the first five years of life. Each stage of development for children follows a straight line.

Unoccupied play is typically observed in very young children, usually between zero to three months. Children often start this first common type of play during the initial months of life.

At this stage of development, newborns or young children appear to move erratically with their hands, feet, arms, and legs but do not interact with others.

Children don’t appear to be playing during this period; instead, they watch anything that might momentarily catch their attention.

The youngster focuses on a single task during this phase of play and expresses minimal to no curiosity about what other children might or might not be doing. Even though Parten’s stages of play include solo play, older kids’ and even adults’ play cycles frequently include it.

When a youngster can concentrate on one toy for longer than a minute, the solitary play could be evident. Your child may be immersed in playing alone with their toys or other things at this point. Parents may occasionally worry about why their child isn’t interacting with their sibling or other kids.

Children at this age, however, could be too preoccupied with their play to notice or pay attention to others. Babies start to develop their cognitive and physical skills at this age. He could be trying to improve his social abilities. This time in a child’s life is crucial because it instills in them the value of being satisfied and happy in their own company.

A child goes on to the onlooker stage after the solitary playing stage. Kids between the ages of two and a half and three are most likely to experience this. It is called an onlooker form of play when a kid watches and analyzes other kids playing but has no direct interaction.

A youngster at this age has no idea what is required of him, what the boundaries of the games are, etc. He might be concerned about these things, which would prevent him from playing with his friends. But at this point, he understands by observation.

The first indication that kids are interested in the social components of play is when they observe, inquire about, and make suggestions to others. They don’t, however, actively take part in the play.

The observer is unquestionably watching a specific group of kids instead of anything else that appears to be fascinating at the time instead of idle play.

When kids start playing side by side but aren’t playing with each other, it’s called parallel play. They may not appear to be interacting, yet they constantly observe and occasionally copy one another. The urge to be among other kids starts to emerge at this point.

Parallel play is one of young children’s earliest indications of simple social play. Children go from solitary players to social ones throughout this “stage.”

The youngster prefers to play with the same toys; therefore, there is a social aspect even when there isn’t any direct social connection between the child and other kids.

The ideal items for this are individual puzzles or playdough. This is the ideal opportunity to watch and apply the Montessori principle of not interrupting a child’s attention.

After the parallel play stage, kids frequently move on to associative play. Activities in associative play are flexibly organized. Even though they engage in the same or similar activity, children may have different objectives and priorities. Although they might communicate with one another, there is little actual cooperation.

As kids get older, associative play is more prevalent. Children learn how to interact with others throughout this stage of play. It fosters teamwork and strengthens linguistic abilities.

Associative play doesn’t follow any strict rules. There is no guarantee that all the children in this stage play with the same toys or engage in the same activities.

Here is where students begin to put into practice the abilities they developed via spectator and parallel play. Not simply the item but also socializing with other kids appeals to them.

Having open-ended toys that multiple kids may play with at once is one of the best ways to support and promote the associative play.

It can be challenging to tell the difference between cooperative and associative play because of their close relationship.

A child engages in cooperative play when they play in a group set up to create something or accomplish a common objective. Around three-four is when children start playing cooperatively.

Cooperative Play can take various forms, but some more popular ones have organized sports, role-playing games for kids, and board games.

This stage is regarded as a critical component in the growth of social interaction because it offers opportunities to examine current concepts and consider other viewpoints.

Tips for Supporting Your Child Through these Stages of Play

Get Your Child the Right Toys

If the youngster engages in age-appropriate play, learning will be more successful. Purchase toys that are appropriate for him. And demonstrate to him how to play with and use toys.

Take your kid out so he can play with other kids his age. Your youngster may gain greater social skills as a result of this.

Pay Attention to Your Child’s Transition

Ensure your youngster is doing it correctly as he moves from one stage to the next. Encourage your child to play with other kids when they reach the age of four if you see that they are not playing together.

These phases are basic suggestions for what to anticipate in terms of your child’s play abilities; however, keep in mind that every child is unique, so if you have any concerns, talk to your healthcare professional.

While the six-play stages are mastered sequentially, they can be revisited after mastery. In other words, a youngster may continue to engage in parallel play even after mastering cooperative Play.

Although this play taxonomy might be helpful for teachers and parents, remember that every child has a different preferred type of play.

Parents may become concerned if their child’s play only sometimes corresponds to a particular play stage because of the theory, its stages, and age profiles. What Is Parallel Play? Its Benefits & Activities To Encourage

How do I entertain my child without screen time?